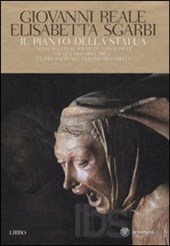 This film, commissioned by the region Emilia Romagna, whose title is inspired by a Corrado Govoni work in 1930, stems from the wish to give voice to that extraordinary sacred theatre in which can be sum up the deep sense of the pietas, sculptural masterpieces of the Renaissance art which seems to embody all the experience of the human grief illuminated by the ultra-earthly sparkle of faith. It is a theatre turning into cinema, using the immense image potentials of these materic compositions almost timeless, such as those by Niccolò dell'Arca, Guido Mazzoni and Antonio Begarelli. And it also turns into literature, as proved with great emphasis by the texts written by international film-directors, like Michael Cimino and George Romero, and by different writers, like Antonio Scurati, Diego Marani Pino Roveredo, Lucrezia Lerro and Vittorio Sgarbi. The passionate voices of Anna Bonaiuto and Toni Servillo let the chant of love and grief of these texts emerge with strong force, until the statues melt into liquid tears. So, the spectators can nearly live the original experience which inspired/disquieted the artists of the Pietas. And this is the reason why the theatrical vision produced thanks and through these inimitable, not minor works, becomes, through the camera, a centuplicated vision: reaffirming, beyond every interpretative limits, a symbiosis of art, cinema and literature.