THE LANGUAGE OF ROGUES - ROMANINO IN CAMONICA VALLEY 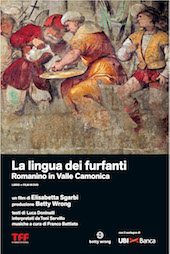 The language of rogues - Romanino in Camonica Valley

Giovanni Testori wrote that “in Pisogne, Breno, Bienno, Romanino tended to make confusion, there’s no doubt. He seems to have taken characters on scene by kicks in their ass; we are not surprised that, once there, between impetuos inability to organize, in language and shame, they ended to blow up everything; starting with their limbs to nish with words, burping smoky tavern tasting bubbles, and with the oiled feathers of their hats, as the ones of old pissed off turkeys.”
Elisabetta Sgarbi comes back to Girolamo Romanino, she comes back in Camonica Valley, after her work on Via Crucis of Cerveno by Beniamimo Simoni, with the tick words of Testori in her mind, and with the accurate theological reconstructions by Giovanni Reale (that demonstrate the deep knowing of faith matters that Romanino had). In The language of rogues she puts in a one movie the cycle of frescos that Romanino realized between 1532 and 1541, in Pisogne, Breno and Bienno; and he takes seriously that exchange between life form that Romaino’s frescos emanate in the three churches: she comes back between the houses and the people of those villages, that Romanino too must have observed for long, and, in the end, portrayed; she puts them at work again and manage them as painting, to give new life to Romanino’s already wild painting; and going on with that exchange that runs through Romanino’s adventure in that valley near Brescia, protect- ed by Venice and Rome brightness, and that does not regret none of them.

“This is a continuous movie, that I’ve been following for years. Or rather, that has been following me for years, even before knowing Valle Camonica, even before knowing Romanino: since my uncle Bruno, my mother Rina, and my brohter Vittorio then, used to climb up there, forerunning me. So that this movie, so personal in tones, seems to me like a strange family biography, a kind of my hidden coming of age novel, that I’ve shared with another friend and partner in many adventures, Giovanni Reale.” — Elisabetta Sgarbi

Toni Servillo
In 1977, he founded the Teatro Studio di Caserta, and in 1987, he helped set up the Teatri uniti, with which he produced internationally-acclaimed plays, as both actor and director, using texts by Moscato, Viviani, Molière, de Filippo, Goldoni and Marcoaldi. In 1999, he made his debut directing operas, go- ing on to direct works by Martin y Soler, Mozart, Cimarosa, Mussorgskij, Richard Strauss, Beethoven, Rossini and Battistelli, in theatres all over Europe. He has acted in lms by Mario Martone, antonio Capuano, Paolo Sorrentino, Elisabetta Sgarbi, Fabrizio Bentivoglio, andrea Molaioli, Matteo Garrone, Stefano Incerti, Nicole Garcia, Claudio Cupellini, daniele Ciprì, Marco Bellocchio and Roberto andò, earning him various accolades, including the david di donatello and the Nastro d’argento (both four times). He has also twice been named Best European actor.

Luca Doninelli
Luca doninelli was born in Leno (BS) in 1956. In 1978 he met Giovanni Testori, who encouraged him to write his rst book, Intorno a una lettera di Santa Caterina, in 1981. His narrative works include I due fratelli (1990), La revoca (1992), Le decorose memorie (1995), Talk show (1996), La nuova era (1999), Tornavamo dal mare (2004), La polvere di Allah (2006), Fa’ che questa strada non nisca mai (2014), Le cose semplici (2015). He teaches narrative ethnography at Milan’s università Cattolica, a discipline that has led to two works: the volume Cattedrali (2011) and the collective project Le nuove meraviglie di Milano – a work in six volumes of which three have already been published: Milano è una cozza (2010), Michetta addio (2011) and Vacanze Milane (2012) – and Salviamo Firenze (2012). He has been awarded many accolades including the Premio Selezione Campiello, the Grinzane-Cavour, the Supergrinzane, the Premio Napoli and the Premio Scanno. He was also shortlisted for the Premio Strega in 2000, and is mar- ried with two children.