TRESIGALLO, WHERE THE MARBLE IS SUGAR 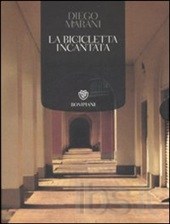 Tresigallo, where the marble is sugar

Diego Marani returns to the places of his childhood and youth; to his village, Tresigallo, and writes a script which is a love song expressing his homesickness for a land that still exists and at the same time is lost; it can only be relived in the memories and in reveries: and so, little by little, the outline of a landscape that he has always kept under his skin starts coming out: straightaway roads and round squares, the hypnotic geometric framework of the tiled avenues, the porches illuminated by sunlight, the imperceptible sense of sacred pervading everything, the happy bike rides in the vitreous and foggy silence of the countryside. And at last, the awareness that as long as the wheels of the bicycle keep spinning, we will be all safe, and still holding a secret, that of an ancient land in which an ancient pride is deep-rooted.

Diego Marani, author of the text
Diego Marani was born in Ferrara in 1959. International official, he works at the Council of Ministers of the European Community. In 2000, Bompiani published his first novel, Nuova grammatica finlandese, which won, amongst others, the Grinzane Cavour Prize. This is the first book in which the author offers one of the central themes linked to the fantasy genre, that of a primordial language of the mankind in which it is condensed the deep nostalgia of the contemporary world for its mysterious and enchanting mythical origins. On the same theme, with a stronger Middle-European flavour, is focussed both his second novel, L'ultimo dei vostiachi, (Bompiani, 2002, Premio Campiello - Selezione Giuria dei Letterati and Premio Stresa), and L'interprete (Bompiani, 2004), in which the life experience of the Babel of languages and dialects of the world has an adventurous and thrilling aura, in the wake of the great tradition of Jack London and Leo Perutz. On the contrary, Il compagno di scuola (2005, Premio Cavallini) and Come ho imparato le lingue (Bompiani, 2005) represent the other aspect of Marani's literary personality: the withdrawal into himself, the memory as a gift to cultivate in secret in order to re-create, through the recovery of the experience of one's childhood and youth, the conditions of a life filled with Sense, with primordial Worth. In 2003 Marani published the essay A Trieste con Svevo in Bompiani pocket series, a brilliant reconstruction of the real and imaginary paths of one of the masters of the 20ieth century literature, the author of La coscienza di Zeno.
Marani also invented a new language, the "Europanto", a divertissement that allowed him to flirt with the fantastic universe exploding each time in his novels and short-stores, with a systematic visionary strength that constitutes the major merit and charm of this writer.
Marani's works have been translated into several languages.