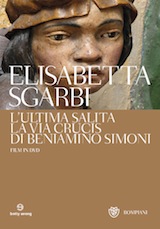 The third episode of the Trilogy on sacred art, “The last ascent”, takes us into the heart of the XVIII century, in Camonica Valley, where the parson Gualeni commissions to the artist from Fresine 14 chapels of wood and chalk statues on the Calvary of Christ. Once again, we follow the way shown by Giovanni Testori, among the first - if not the very first - to enter the mysterious world of the artist of Valsaviore and to interpret the paradox of this great masterpiece of Italian sculpture, the Via Crucis, suddenly abandoned and completed, later, in loco, by the Fantoni brothers.
The film renders, for the first time, the whole of the “Sacred Stairs” of the Via Crucis, as it was intended in Simoni’s original project. In fact, not only does it show all the sidereal distance between Simoni’s manufactures – dramatic, tragic, revolutionary, disruptive – and those by the Fantonis’, always defused into the forms of the grotesque; but the film also relocates Simoni’s “Lamentation” into the place where it was meant to be: chapel 14 (now inhabited by a XIX century sculpture). The music by Franco Battiato is intertwined with the texts by Giovanni Testori, Vittorio Sgarbi, Erri De Luca, Remo Bodei, Emanuele Severino, Tahar Ben Jelloun, and the voiceover by Toni Servillo.